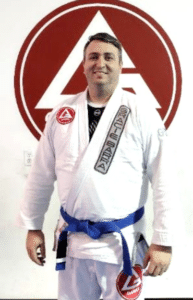 Jon is the greatest example of persistence in the gym. Four years ago he called to join. He lasted about 4 months due to life circumstances. A year later he called us back and said he was ready to recommit. On his first day back in he made sure to get a picture with our head instructor, and then 3 months later he had to stop again due to life circumstances. For the next year off and on he kept saying he was coming back. Finally, he did, admittedly with much skepticism on our part. But since that time Jon has been a stalwart practitioner and coach, running our noon classes and often helping out in the evenings. Jon’s lesson is a great lesson for EVERYONE. Life WILL happen, but you have to pick yourself up and get back at it. Jon has an incredible level of detail in his technique and understanding of Jiu-Jitsu and is a beast on the mat. At Gracie Barra, we know it’s the PERSON that’s important, not the belt.